Looks like, Bullseye will be making his way to Hell’s Kitchen in Daredevil Season 3. If rumours are to be believed by Reddit user “defenders_throwaway then it looks like a follow up news by That Hashtag Show has probably convinced us that Bullseye will indeed be in the season. 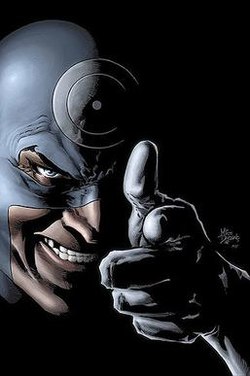 Last fall, it was announced that actor Wilson Bethel (Heart of Dixie) had been cast in a “pivotal role” of Daredevil season 3. Bethel is playing an FBI agent, “who will play a critical role in the conflict between Matt Murdock and Wilson Fisk, better known as Daredevil and Kingpin respectively.” This could possibly be misleading, but based on more news –  Bethel is actually playing a character who will be revealed as none other than Bullseye!

The give away is the hair trigger temper…which is synonymous with Bullseye.

For those who don’t know much about Bullseye:

Bullseye (Lester) is a fictional character appearing in American comic books published by Marvel Comics. A psychopathic assassin, Bullseye uses the opportunities afforded by his line of work to exercise his homicidal tendencies and to work out his own personal vendetta against Daredevil.

Although he possesses no superpowers, Bullseye is able to use almost any object as a lethal projectile, be it weapons like shuriken and sai or seemingly harmless objects like playing cards and pencils. His marksmanship is uncanny, at a nearly supernatural level, but he has been known to miss moving targets.