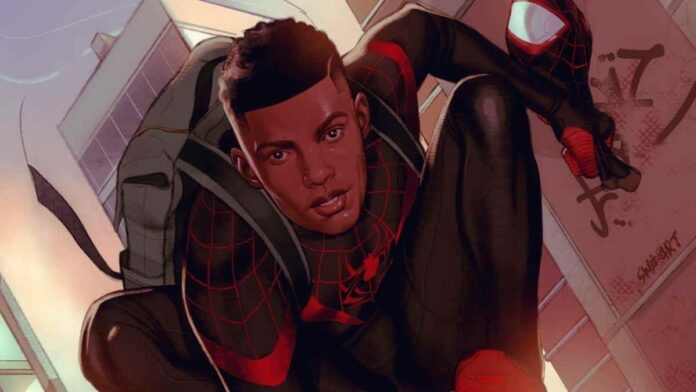 Check out this new fan art work of what Miles Morales could look like in the Spider-Man Universe from Sam Raimi!

Have to say, it’s insanely impressive, and feels more real than it should!

With all the buzz that the Multi-verse has created with Spider-Man: No Way Home and Dr. Strange Multi-verse of Madness, it’s not too far fetched to imagine this may happen sooner than later!

A little history of Miles Morales if it’s of interest:

Miles Morales first appeared in Ultimate Fallout #4 (August 2011), following the death of Peter Parker. The 13-year-old biracial teenage son of an African-American father and a Puerto Rican mother, he is the second Spider-Man to appear in Ultimate Marvel, an imprint with a separate continuity from the mainstream Marvel Universe called the Ultimate Universe (Earth-1610). He was featured in the Ultimate Comics: Spider-Man comic book series, and after Marvel ended the Ultimate imprint in 2015, Miles was made a character in the main Marvel Universe (Earth-616), beginning with stories under the All-New, All-Different Marvel branding that debuted that same year, with the older native 616-Morales ultimately being established as the character’s archenemy: Ultimatum.

The character was not the lead character in the Ultimate Spider-Man animated television series on but he was later added to the main cast, as Kid Arachnid, and featured the main protagonist in the 2018 animated feature film Spider-Man: Into the Spider-Verse which won the Academy Award for Best Animated Feature, and its 2023 and 2024 sequels. Reaction to the character varied, with some, including Spider-Man’s co-creator, Stan Lee, approving the creation of a positive role model for children of color.

Others expressed displeasure at the replacement of Peter Parker, with The Guardian, Fox News, and Culture Map Houston reporting that some fans viewed the decision as an attempt by Marvel Comics to exhibit political correctness, and that the introduction of a minority Spider-Man was simply a publicity stunt to attract more readers, a charge Alonso denied. Alexandra Petri of The Washington Post called for the character to be judged on the quality of his stories, which garnered positive reviews. The character possesses powers similar to those of the original Spider-Man, which were derived from the bite of a spider genetically engineered by Spider-Man’s nemesis Norman Osborn in an attempt to duplicate those abilities.