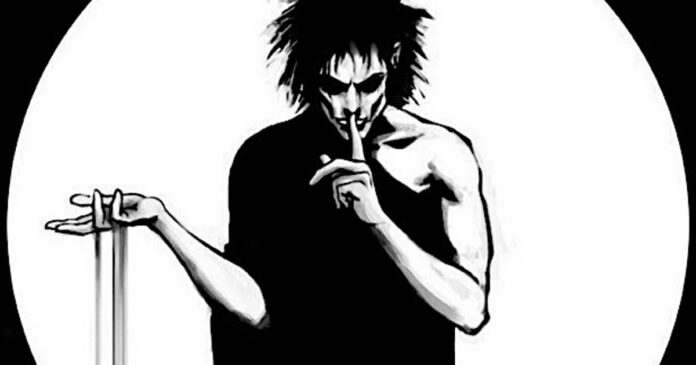 Who is the Sandman you ask?

The Sandman is about an immortal being, the lord of dreams. He’s known by a variety of names, including Dream, Morpheus, and very rarely, the Sandman. He is one of the Endless, seven beings who are not exactly gods who represent various aspects of existence beginning with D. He is tall, pale, haughty and Byronic, and when it comes down to it, very unhappy. Gaiman has summed up the story as “The Lord of Dreams learns that one must change or die, and makes his choice.”

The major theme of the series is whether it is possible to give up a role you have put your whole identity into, that defines you. Dream is obsessed with his responsibilities as lord of dreams and feels he cannot neglect them. But his brother Destruction abandoned his role, and destruction continues to happen without his oversight. Lucifer abdicates as king of Hell, and after various interested groups from various mythologies vie to take it over, God appoints two angels to torment the damned in his place. The series starts with Dream being imprisoned by magicians for seventy years, and while his kingdom fell apart, people kept dreaming. He could quit his job, but he feels he can’t.

The problem is, it’s not the job that’s the problem. It’s not that he doesn’t like what he does, it’s that he doesn’t like who he is. He has existed for millions of years and has had time to do terrible things, like condemn a mortal woman he loved to Hell for thousands of years for turning him down or abandon his own son to live for thousands of years as a severed head, that he now regrets but can’t undo, and he knows there are limits to how much he can change his personality. The story is about his efforts to make what amends he can for his misdeeds, and create the circumstances where he can take himself out of the picture and a new lord of dreams can take his place.

with that said, here are top 5 insanely thought provoking quotes from the series!

Hailing from another short tale called The Hunt within Fables and Reflections, this quote is said by a character we only know as Granddad. We never find out his actual name, unfortunately. When his granddaughter complains that she is bored, he recounts a story to her.

During his story, she pulls him up on some continuity errors within the tale, to which he says, “You shouldn’t trust the story-teller; only trust the story.” It’s a clever response that silences his granddaughter and allows him to continue.

Once we have something, naturally, we no longer have need of it because we have it in our grasp. It’s the price we pay for fulfilling our desires.

Coming from the award-winning issue A Midsummer Night’s Dream, we’re given yet another wise line from Dream himself. He speaks to Titania about William Shakespeare’s ability to create timeless stories, yet admits that it is mortals fault to not understand the price of such tales.

“One thing I’ve learned. You can know anything. It’s all there. You just have to find it.”

It’s a lovely quote that brings the struggles of trying to learn things down to one simple truth. In a world where information is everywhere, all you need to do is find it. This was said by John Constantine during issue #3, Dream a Little Dream of Me. When Mad Hettie tells him that a man known as Sandman has returned, he disregards her comment by saying the Sandman is simply a “fairy story” for children.

“Any view of things that is not strange is false.”

Is strangeness a virtue? From one of the most famous Sandman quotes, and now to one of the lesser-known ones. Coming from the issue Soft Places, from Fables and Reflections, this quote definitely makes you think. It is mentioned when Marco Polo is lost in the desert, in a place where the Dreaming and reality collide, known as Fiddler’s Green.

“It is sometimes a mistake to climb; it is always a mistake never even to make the attempt.”

No other quote in the entire Sandman saga will inspire you to think and change your mindset as much as the time Dream offered Todd some heartfelt words of motivation. Todd was never a fit man; in the story, he mentions that he never even climbed trees as a kid. Now, in his dream, he is nearing the top of a rock face. When he feels he is about to fall, Dream appears and gives him this wonderful speech!