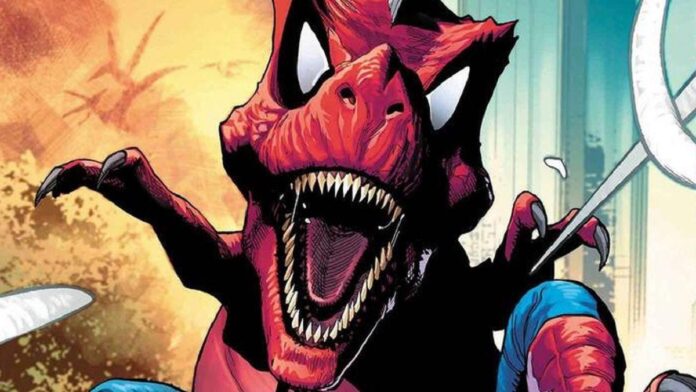 There’s Peter Parker and there’s Pter Ptarker. No it’s not a typo, because he’s a Dinosaur! Yes, I think the “P” is silent!

While Pter Ptarker was once a pterodactyl and victim of the T.rex “Norrannosaurman” and his velociraptor cronies, the prehistoric counterpart to Peter Parker is bitten by the T.rex just as both dinos are hit by a comet inexplicably covered in spiders. When the giant lizards wake up in Edge of the Spider-Verse #1, Ptarker is shocked to discover he’s become a red and blue T.rex with white eyes (resembling the costume of Spider-Man). Likewise, Pter’s foe has become a hybrid mix of a T.rex and pterodactyl bearing the green and purple colors of the Green Goblin. No longer afraid, the new Spider-Rex can shoot webs at his foes and swing from the trees overhead, declaring himself Earth-66’s King of the Dinosaurs.

For what it’s worth, Edge of Spider-Verse, as a collection, has meant a number of issues for Marvel and allowed for some crazy explorations. This being just the first of many hopefully that gets more crazier! I loved it, and I’m sure you will too! After all, the saying:

is as old as time itself!