2014 is Batman’s 75th anniversary. And the past 75 years have seen every conceivable Batman story. Sometimes he fights muggers; sometimes he fights space gods. He can be the ultimate loner, relying on no one, or the ultimate team man, with Robin, Alfred, Commissioner Gordon, Batgirl, Nightwing and Batman Incorporated by his side. He can be as immature as a 2-year-old or as wise as a ninja Jedi Buddha. He’s just as at home in Arkham Asylum as he is in the Justice League’s Watchtower on the moon. He can be campy like Adam West, angsty like Christian Bale or made of Legos like Will Arnett (at least in “The Lego Movie”).

In honor of his 75th anniversary, here’s a look at some of the best comic books of Batman that you should absolutely own.

This comic book recounts the first battle of Batman with Joker. It is packed with violence and action and is exciting to read because of its several narrative twists. Considered the modern Joker epic, The Man Who Laughs features both the psychotic side and the playful side of Joker. The comic was released in February 2005, and intended as a successor to Batman: Year One. While the story seems to take place directly after Year One, the beginning is tied into the ending of Batman and the Mad Monk, in which Gordon reveals the warehouse of corpses.

Written by Ed Brubaker and art by Doug Mahnke

Strange Apparitions deals with a number of elements coming to a head at one point in Batman’s life. A new villain appears in Gotham City, Doctor Phosphorus, who terrorizes the town by contaminating the water supply. He also blackmails the city council (whom he had previously held ties to), demanding that they remove Batman from his path. This political pressure is fronted by Rupert Thorne, local corrupt boss. Along with the two new ones, an older, forgotten Batman foe appears, the nefarious Hugo Strange, who both discovers Bruce Wayne’s identity, and usurps it. Batman also comes into conflict with Deadshot and The Joker. All of this is made much more complicated by Wayne’s introduction to Silver St. Cloud, a local socialite who just might be the first person to truly penetrate his emotional barriers.

“A Death in the Family” is a Batman comic book story arc first published in the late 1980s which gave fans the ability to influence the story through voting with a 900 number. “A Death in the Family” ran in Batman #426-429, published in 1988-1989. The story follows Jason Todd, the second Robin. In the beginning of the story, Jason and Bruce are in uniform hiding behind some crates while a mob plans. Then, out of the blue, an impatient Jason leaps out from behind the crates and attacks the criminals. When the struggle is over, Bruce asks him what he was doing and said one of these times he is going to get killed. Bruce then asks him if he thinks this is a game, and Jason replies “Yes, life is a game.” Bruce therefore relieves him from duty and asks him about his parents. Jason resents this and storms out refusing to discuss the issue. The rest as they say…we’ll..read the book.

Taking place during Batman’s early days of crime fighting, The Long Halloween tells the story of a mysterious killer named Holiday, who murders people on holidays, one each month. Working with District Attorney Harvey Dent and Captain James Gordon, Batman races against the calendar as he tries to discover who Holiday is before he claims his next victim each month, while attempting to stop the crime war between two of Gotham’s most powerful families, Maroni and Falcone. This novel also acted as a main introduction for one of Batman’s most elusive foes, The Calendar Man, who knows the true identity of the Holiday killer but refuses to share this with Batman. He instead riddles and gives Batman hints from his Arkham Asylum cell. The story also ties into the events that transform Harvey Dent into Batman’s enemy, Two-Face. Enemies such as Scarecrow, The Joker, Mad Hatter, Poison Ivy and The Riddler, among others, also make an appearance.

In continuity terms, The Long Halloween continues the story of Batman: Year One. It also revolves around the transition of Batman’s rogues gallery from simple mob goons to full-fledged supervillains. It also tells the origin of Two-Face, adding along to the story in Batman: Annual #14.

Dark Victory was written by Jeph Loeb and serves as the direct sequel to The Long Halloween. It explores the transformation of Harvey Dent into Two-Face as well as the ramifications of the city’s new super villains. It also centers on the new serial killer who poses threats on the city and the origins of Robin.

The series takes place primarily during the third/fourth year of Batman’s career. The plot centers on a series of murders involving Gotham City police officers by a mysterious serial killer only known as The Hangman. Central to the storyline is a territory war between Two-Face and the remnants of the Falcone mob, led by Sofia Falcone.

The story is also a re-telling of the origins of Batman’s sidekick Robin and his adoption by Bruce Wayne. The story brings closure to many characters introduced in Frank Miller’s Batman: Year One.

Batman: The Cult is a four-issue comic book mini-series. It was published by DC Comics in their prestige format books and released in 1988. It was written by Jim Starlin, illustrated by Bernie Wrightson, colored by Bill Wray and edited by Denny O’Neil. The concept of an underground army was used in The Dark Knight Rises film, with the villain Bane as the leader instead of Deacon Blackfire.

The story follows the machinations of Deacon Blackfire and his band of homeless followers who have kidnapped Batman before the events of this story. Following a lengthy period of captivity Batman slowly succumbs to brainwashing. Batman is eventually freed from the cult but takes a long time to recover from his treatment at their hands. The story also delves into other territory. Gotham City politicians are assassinated by Blackfire’s party of followers. An attempt on Commissioner Gordon’s life is tried by Blackfire’s group, leaving the commissioner in a hospital. Beyond Gotham authorities to protect the city, the National Guard is called in, then the Military and Martial Law is declared on Gotham. The series also features the second Robin, Jason Todd.

Often shortened to Batman: Arkham Asylum) is a Batman graphic novel written by Grant Morrison and illustrated by Dave McKean. It was originally published in the United States in both hardcover and softcover editions by DC Comics in 1989.

This is the only Batman comic book that incorporates the pacing and prose of gothic literature during the 19th century. It begins with Batman being forced to get into the asylum to suppress the riot after joker leads an upheaval against the nuthouse of Gotham. This book characterizes the rouge of Batman not as inherent villains but as maladjusted members of the society. For me, Arkham Asylum is unlike any other Batman book you’ve ever read  and is easily one of THE BEST superhero books to ever grace a bookshelf.

This comic book was written by Alan Moore and tells the life story of Joker before he became the psychotic menace in the Batman series. The narrative lets readers have some sense of compassion for this villain as it narrates how he wasn’t really born evil but only became a victim of his tragic world.

Considered by many critics to be the definitive Joker story and one of the best Batman stories ever published, the story’s effects on the mainstream Batman continuity included the shooting and paralysis of Barbara Gordon (a.k.a. Batgirl) by the Joker, an event that laid the groundwork for her to develop the identity of Oracle.

“Year One“, later referred to as “Batman: Year One“, is an American comic book story arc written by Frank Miller, illustrated by David Mazzucchelli, colored by Richmond Lewis, and lettered by Todd Klein. It originally appeared in issues #404 to #407 of DC Comics’ Batman comic title in 1987.

The story recounts the beginning of Bruce Wayne’s career as Batman and Jim Gordon’s with the Gotham City Police Department. Bruce Wayne returns home to Gotham City at the age of twenty-five from training abroad in martial arts, manhunting, and science for the past 12 years, and James Gordon moves to Gotham with his wife, Barbara, after a transfer from Chicago. Both are swiftly acquainted with the corruption and violence of Gotham City; and from there on…begins the legend of the Batman.

The Dark Knight Returns is a 1986 four-issue comic book miniseries starring Batman, written by Frank Miller, illustrated by Miller and Klaus Janson, and published by DC Comics. When the series was collected into a single volume later that year, the story title for the first issue was applied to the entire series. The Dark Knight Returns tells the story of Bruce Wayne, who at 55 years old returns from retirement to fight crime and faces opposition from the Gotham City police force and the United States government.

Enough and more has been said about this comic – just go and get yourself a copy! 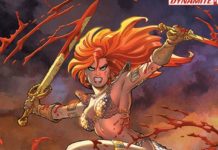