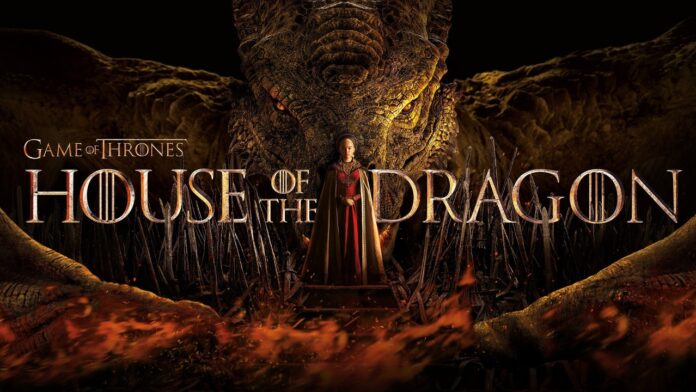 Based 200 years before the events of Game of Thrones (172 years before the birth of Daenerys), House of Dragon recounts the events of the ‘Dance of the Dragons’, which is the civil war that happened within House Targaryen. Prequels and sequels to Game of Thrones have been on and off for a while now and when House of the Dragon was announced, with the intent of diving back hundreds of years ago to see the rise and fall of the Targaryens, many people approached with trepidation.

Although a little slow and with a few problems along the way, House of the Dragon is one of the biggest surprises this year. A well written, politically charged period drama with a lick of fantasy paint for good measure; this is a surprisingly good show. House of the Dragon is not without its flaws, especially when it comes to where this story ends up and the distinct lack of tension hanging in the background like Game of Thrones had. That aside, the time jumps, the rather visceral pace at which is goes when the action heats up, and the thoughtfully peppered dragon scenes, will have you in awe every episode.

Granted some characters didn’t develop as well, and some we’re rather forgetful, especially the “crabfeeder”, who I thought was more menacing when he started, but got taken down rather easily – even if it wasn’t the intent and they tried to make the fight seem more difficult than it was. I talked about pace, earlier, it’s not “fast” in that sense, it’s like a roller coaster, slow to build, and then quick to drop – which many may exciting or right, but it’s not a constant “dragon balls to the walls” (see what I did there?) action packed show. House of the Dragon plays out like a very complicated fantasy period drama and if you’re looking for a fast paced action flick, you definitely won’t find that here. While it won’t make up for the ending to Game of Thrones, House of the Dragon is a fine example of a series exceeding expectations and focusing exclusively on its narrative and story. House of the Dragon is well worth watching.

To re-cap the last episode – we finally see lines drawn between the “Black Queen” and the “Green Queen”. The Black being Rhaenyra of course and the Green being Alicent Hightower. After the death of King Viserys and wrongful succession to the throne by his first born Son masterminded by Queen Alicent (and Otto); when the rightful Heir should have been Rhaenyra; the realm is split between the two.

Most importantly, “The Black Queen” provides one of the season’s most suspenseful, bone-chilling moments.

Luke is sent to Storm’s End to garner the support of Lord Baratheon, and Jace is sent to garner Arryn and Stark support. It’s a noble suggestion from Jace in the face of uncertainty and potential war. But Luke is hesitant.

Until now, Luke has never engaged in a political mission on his lonesome. And to make matters worse, he is still a young boy, barely in his teens. But he does as he’s asked and ventures to Storm’s End, where things hit a boiling point between him and Aemond. Upon his arrival, he quickly notices Vhaghar’s presence outside the courtyard, leading to his stress rising, which Arrax feeds off. Once inside, Aemond seizes the opportunity to enact revenge for Luke’s actions in the past. He attempts to force Luke into hand-to-hand combat. However, he’s shooed out of the castle and into the storm, where he hunts Luke down.

Aemond has an unfair advantage; Vhaghar is one of the oldest and largest dragons alive, and Arrax is one of the smallest and youngest. It’s a brutal scene to watch. Aemond stalks the skies, toying with Luke, and exclaiming his profound enjoyment of the situation.

When the dragons begin to disobey orders, Aemond realizes the tragic mistake he’s made. In a desperate attempt to flee to safety, Arrax fires at Vhaghar, hoping to scare them off. However, it only enrages the creature, leading to the first moment on House of the Dragon, where a dragon disobeys its rider. Luke and Arryax’s deaths are quick and over in mere moments, but it’s a bone-chilling scenario. The scene with Vhaghar above Arrax and Luke in the storm is horrifying. The sheer size of Vhaghar against the younger dragon is enough to send shivers.

Plus, the lasting implications of the decision will change everything we know about the series as we advance.

Vhaghar is over 100 years old, has seen war, and has proven to kill at will for its rider. It’s mind-boggling that Aemond thought he could transfer all of that anger into his dragon and nothing destructive would come of it.

Whether he intends to murder his nephew and begin the war or not, Aemond will still have to face the consequences of his actions. How he chooses to approach them will be the real question, though. Will he admit to accidentally killing Luke, or will he create a false narrative and say he accomplished what he set out to do?

Rhaenyra suffers tremendously on “The Black Queen.” Not only does she lose her father and crown, but two of her children as well. We see the stress of Viserys’ death immediately take a toll on Rhaenyra.

The gravity of the situation is too much, and Rhaenyra’s body betrays her. It’s a grueling moment to witness. Just as we endured Aemma’s unfortunate death at the beginning of the series, we are forced to sit through the same situation.

Except, whereas Aemma loses her life and her son, Rhaenyra is forced to live with the outcome. To add salt to the wound, it’s announced that Luke has also died just a few hours later. In the span of forty-eight hours, she loses most of the things she values most in life.

From this moment forward, anything Rhaenyra does is justified. Almost everything she holds near and dear to her has been stripped away; it’s time for her revenge.

It’ll be interesting to see the lengths Season 2 will venture to and the cruelty Rhaenyra will exhibit against the Hightowers.