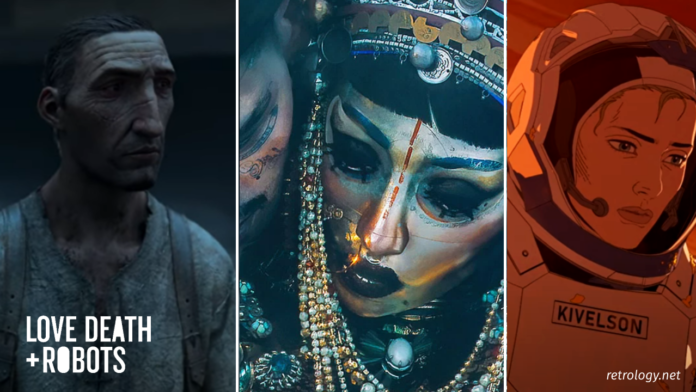 Love, Death, and Robots” has been renewed for Season 4 at Netflix. The streaming giant made the announcement Friday via Instagram. The acclaimed episodic anthology series dropped its nine-episode third season on Netflix on May 20, 2022. Seasons 1 and 2 aired in 2019 and 2021 respectively. Love, Death, + Robots is an animated episodic anthology series with each episode telling an all-new story in various animation styles. Each episode varies completely, including in genre, ranging from comedy to drama, and even horror. The series is also notable for its rotating cast of voice actors. Previous guest actors on the show include Joel McHale, Mary Elizabeth Winstead, Topher Grace, John DiMaggio, Elodie Young, and Chris Parnell.

Netflix’s announcement of the new season was made via Instagram, in an animated post to the Netflixgeeked account. The image flashes several bright colors and then the words “Volume F***!”. The post also included three small images illustrating the three core words that sum up the series (that is, a heart for love, an X for death, and a little tiny robot head for, well, robots).

Volume 4 does not yet have a release date.

In a previous interview, Supervising Director Jennifer Yuh Nelson explained that the variety in stories and animation styles present throughout Love, Death + Robots continues to be the key to the success of the series. “You need a mix in an anthology like this in order to appreciate each different one. If everything is the same, none of it stands out,” she said. “You have to have contrast to understand what each unique thing has got going for it. So if something gets too dark and serious, we try to find one that’s a little bit lighter and sort of mix it in.”